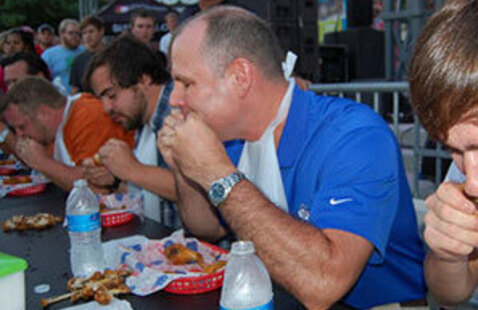 Come down to scenic Suwanee Town Center Park for the two greatest things in the world: music and wings!

Featuring all four original band members, the Spin Doctors will bring their unique 90s sound to Suwanee as they headline the annual August Concert & Wing Festival on Saturday, August 12 at 5 p.m. in Town Center Park.

The Spin Doctors’ debut studio album, Pocket Full of Kryptonite, released in August 1991 featuring their top singles “Two Princes” and “Little Miss Can’t Be Wrong.” The band was nominated for a ‘Favorite Pop/Rock Album’ American Music Award in 1994 for the album and a Grammy in 1994 for ‘Best Rock Performance by a Duo or Group with Vocal’ for “Two Princes.”

Suwanee’s free August Concert & Wing Festival will feature opening bands starting at 5 p.m., all leading up to the Spin Doctors taking the stage at 8 p.m. Beer and wine will be available from onsite vendors and Town Center merchants. Alcohol must be purchased on site – as always, bringing your own alcohol is prohibited.