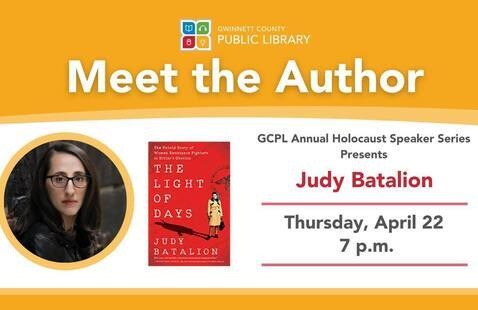 Join GCPL for our annual Holocaust Speaker Series. This year we feature Author Judy Batalion and her book The Light of Days, a true tale of brave Jewish women who became resistance fighters.

Of the millions of stories of World War II and the Holocaust that shape our collective understanding of those history-changing events, until now there was not a book dedicated to the daring resistance efforts of young Jewish women in the ghettos of the Nazi occupation.

The Light of Days: The Untold Story of Women Resistance Fighters in Hitler's Ghettos by Judy Batalion, is a culmination of a decade's worth of research.

Witnesses to the brutal murder of their families and neighbors and the violent destruction of their communities, a cadre of Jewish women in Poland—some still in their teens—helped transform the Jewish youth groups into resistance cells to fight the Nazis. With courage, guile, and nerves of steel, these “ghetto girls” paid off Gestapo guards, hid revolvers in loaves of bread and jars of marmalade, and helped build systems of underground bunkers. They flirted with German soldiers, bribed them with wine, whiskey, and home cooking, used their Aryan looks to seduce them, and shot and killed them. They bombed German train lines and blew up a town’s water supply. They also nursed the sick and taught children.

Judy will be in conversation with Joy Pope, the Executive Director of the AJC Decatur Book festival. Books are available for purchase at Eagle Eye Book Shop and will include signed bookplates.