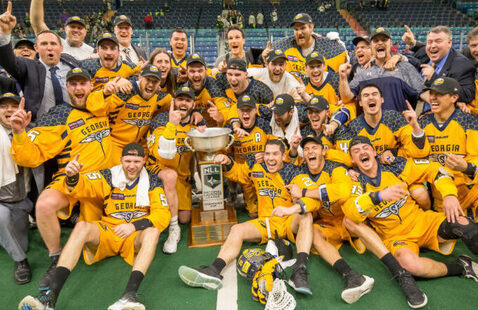 The National Lacrosse League has determined that it is in the best interests of our fans, our players, our coaches and our staff to temporarily suspend play until further notice due to concerns over COVID-19.

The Georgia Swarm Pro Lacrosse team is a member of the National Lacrosse League (NLL), which is North America’s professional indoor lacrosse league and features the best players in the world. In 2017, the Swarm became NLL World Champions after a historic 17-5 season and brought Atlanta its first professional world championship in 22 years. The Swarm compete in an 18-game regular season schedule from December to April, followed by the NLL Playoffs in May and June. The Swarm play their home games at Harrah’s Cherokee Casino Field at Infinite Energy Arena in Duluth, Ga.​ The 2019-20 NLL season will be the Swarm’s fifth season operating in Atlanta and 16th overall as a franchise. The Swarm previously spent 11 seasons playing at Xcel Energy Center in Saint Paul, Minn. from 2005-2015. The team is owned by John Arlotta and Andy Arlotta.