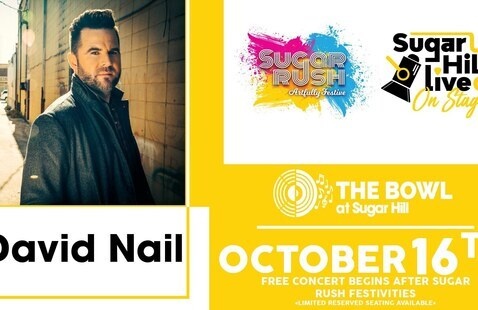 We are so excited to bring Sugar Hill Live On Stage to you this October for Sugar Rush. Join us at The Bowl for a free concert, October 16, following the day's events.

Hailing from Kennett, Missouri, David Nail is well-respected up and down Music Row. Some might even call him a “tour de force” as his songs pull no punches in evoking the demons with which he has wrestled through much of his life. The GRAMMY-nominated multi-platinum singer/songwriter’s early releases, I’m About To Come Alive, The Sound Of A Million Dreams, I’m A Fire and Fighter, ignited his reputation as an innovator and creative risk-taker yet left Nail feeling restless.